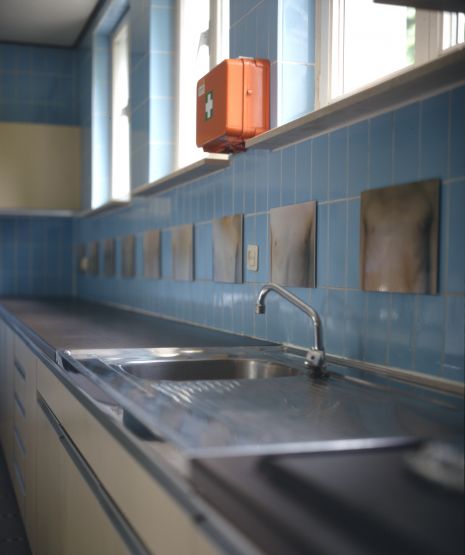 The children’s studio in Willebroek (B) invited Pierre Mertens to make an exhibition together with children from the studio.

Willebroek was a polluted municipality from which much industry had left, resulting in poverty of the population.

He made life-size self-portraits with the children, which he hung on a rack and blown through the wind with a fan.

He gave a video camera to the children and asked them to film their home. From these he selected stils what he presented as dots on the wall.

In the blue-tiled kitchen of the castle, he placed the photographed naked chests (referring to poor air quality) of the children.

Pierre Mertens also referred to his own childhood in two works. On a worn-out billboard from the municipal elections, he projected pictures of his own childhood. He presented drawings from adults’ studios with a somewhat clumsy self-portrait as a 14-year-old.